People working on Hypnosis and Regression Therapy fields know very well the infinite possibilities which the connections of Spirit, Mind, Emotions and Body bring to their clinical practice. But, notwithstanding the successful results obtained, when argued about the physical mechanisms or processes laying the foundations of their actions, the same people can’t give a reasonable explanation, because there isn’t a well known and comprehensive theory that covers all the domains of the practice on both fields.

The correlation between consciousness, intentionality and Psi phenomena (as a process linking Spirit to Matter) has been leading theoretical wonderings and laboratory efforts of Psi researchers since a long time. Hypotheses have been built, based upon the physical concepts of entanglement, non-locality and resonance as well as considering well known theories, as Quantum Mechanics, Relativity and Karl Pribram’s Holonomic Model.

However, the study of consciousness and intentionality evokes so many questions about the true nature of spiritual and mental states as well as those concerning the way intention can influence physical systems, animate or not, that the theories above indicated don’t get successful to answer them all. This way, considering that research in the PSI field still needs to be based upon a coherent theoretical model as well as upon rigorous experimental procedures and measurements, the Psychoenergetic Model developed by Dr. William Tiller constitutes an excellent choice to cover both aspects in the scientific reconnection of Spirit to Matter.

Dr. William Tiller, Ph.D., is Professor Emeritus of materials science at Stanford University, where he worked for more than 30 years and he has been researching about the direct action of the human consciousness and intention over animate or inanimate systems since a long time. In his rigorous experimental protocols and comprehensive theoretical postulates, he has been demonstrating how a remote and specific human intention can be imprinted on a simple electric device (which he calls IIED – Imprinted Intention Electric Device), which further carries the specific intention to distant target experimental settings, producing the successful results they were expected to produce, such as: increase or decrease the pH of a solution by a full unit; increase, in vitro, the specific  activity of an enzyme/coenzyme system (Alkaline Phosphatase)  or increase the  ATP/ADP ratio inside fruit fly embryonic cells.

This book marks a sharp division line between old ways of scientific thought and old experimental protocols, wherein human qualities of consciousness, intention, emotion, mind and spirit cannot significantly affect physical reality and a new paradigm wherein they can robustly do so!

The main basis from where Dr. Tiller has been developing his Psychoenergetic Model is the particle/pilot wave concept, presented in 1920 by Louis de Broglie, for which he was awarded with the Nobel Prize of Physics in 1929. De Broglie postulated that every particle has a pilot wave associated to itself. Dr. Tiller states that the particle speed multiplied by the pilot wave speed always result in the light speed, squared. As, by relativity theory constraints, the particle speed has always to be lower than the speed of light, in consequence, the pilot wave speed must always be higher than the speed of light.

In summary, the Psychoenergetic Model of Dr. William Tiller can be seen represented in the following picture, extracted, with permission, from one of his books. 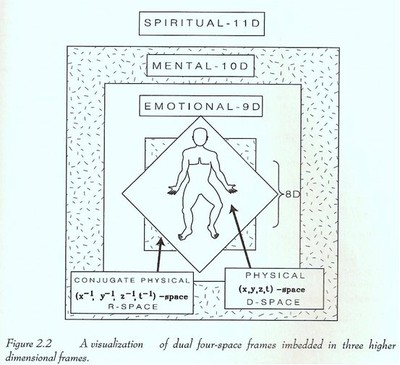 To understand Nature expressions, based on the association of each particle to its pilot wave, there must be a structure for better reference than that one which is constituted only by our ordinary 4 dimensions physical space. Such structure has foundation in a Duplex base space, composed by a Direct Space (D-Space) and a Reciprocal Space (R-Space), both inserted in a higher process, composed of 11 dimensions, like is shown in the picture above.

This Duplex base space is more adequate to describe the particle/pilot wave relation, since it comprehends two subspaces of 4 dimensions each. One of them owns as coordinates x, y, z and t (D-Space) and is associated with particles, while the other owns as coordinates x-1, y-1, z-1, and t-1 (R-Space), being useful to describe pilot waves. If we look carefully, we can observe that the coordinates of R-Space are correspondent to frequencies, three from space (x, y and z) and one from time (t).

From this basis, we can make the following considerations:

– Nature can be observed in its several expressions, simultaneously, from the point of view of a particle (D-space) and from that one of a pilot wave (R-space);

– So, a particular quality of Nature, let’s say Q, brings, in  itself,  two different and conjugate contributions: one coming from the D-space – QD and the other from the R-space – QR, both interrelated, in a quantitative aspect, through a conjugate pair obtained by a Fourier  Transformation;

– This way, in principle, an experimental measurement of Q can be separated in their parts QD and QR, – through a mathematical connectivity between the two subspaces, Direct and Reciprocal, procedure which forms a solid basis for the existence of an information entanglement between both aspects;

– As a consequence, each point in the D-Space is connected to all other points that are in the R-Space and vice-versa. The degree of this connectivity depends on some other factors, but mainly on the called Deltrons, which are like a substance existing in a more elevated dimension (Emotional Domain), outside the Relativity Theory limits. So, Deltrons are able to travel at speeds lower or higher than the speed of light, joining together, quantitatively, conjugate qualities of D-Space and of R-Space;

– Consciousness and Intention can activate Deltrons to induce the coupling between R-Space and the D-Space.An Intention imprints a pattern in the Mind Domain. The mental waves thus generated activate Deltrons in theEmotional Domain and also imprint a specific pattern, which represents the intention, in the R-Space. So, by these actions, Deltrons can imprint through a Fourier Transformation, from R-Space, a conjugate and correlated pattern in the D-Space, which is then detected by the human sensory system and, as a consequence, becomes a psychic and/or physical experience in the physical space – Direct Space.

From this Duplex Reference Frame to higher dimensions, until the domain of the Spirit, the Psychoenergetic Model of Dr. Tiller states reciprocal transformations with different levels of network nodes.

Dr. Tiller Psychoenergetic Model constitutes a very useful theoretical and experimental basis to people working with Hypnosis and Regression Therapy understand their efforts and results, opening a real gate so they can get ahead in their fields.

Ho, M.W. (1993). The Rainbow and the Worm – The Physics of Organisms. Singapore: World Scientific Publishing.

Jonas W.B. (2001). The middle way: Realistic randomized controlled trials for the evaluation of spiritual healing. The Journal of Alternative and Complementary Medicine. 7, 1, 5-7.

Wilber, K. (Ed.) (1982). The Holographic Paradigm and Other Paradoxes. Shambala: Boulder and London.