War and the Soul by Edward Tick Ph.D. 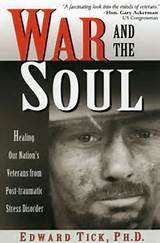 The cover of this book gives us immediate confrontation with tragedy face to face: A 19 year old soldiers’ face tired, dusty, eyes a bit empty, sad, resigned, indicating thoughts of flat expectation and little hope. Photographed by another young man age 22, ‘who did not live to see his pictures in print’, and was killed in a plane crash, this is the start of the book: an In Memoriam to the latter and a Recognition of the first.

The author Edward Tick is a U.S. psychotherapist with years of experience in working with veterans who suffer from PTSD or PTSS (Post Traumatic Stress Disorder or Syndrome), the specific illness of veterans, which was previously known as ‘combat fatigue’, ‘shell shock'(WW1) or else ‘Soldiers’ heart’. Ed was a guest and principal presenter at the IDMA gathering in the mountains near Graz in Austria this summer, titled: ‘War and Human Memory – on soul loss and lost souls’.

Combat veterans from Vietnam as well as noncombatants and resisters have been and still are his patients, but as Ed describes it, not just the veterans keep coming: war makes numerous victims amongst those who survive too. First he saw the Vietnam survivors – young men sent by the Government only to return home with more than physical wounds; in addition they had to encounter criticism and vilification. These were followed by survivors of the WW2 Holocaust, the Korean War and the Gulf Wars well as wars in Lebanon, Panama, El Salvador and Ireland. Most recently it has been veterans from Iraq, Bosnian refugees and terminally ill veterans and their families who have also turned to Tick for help.

To consider PTSD as a stress disorder, Ed’s book convincingly argues, does not convey nor do justice to the severity nature of this type of suffering. Veterans dislike the term PTSD because it totally fails to communicate the extreme character of their condition. Not only do veterans feel misunderstood and unacknowledged in their affliction, as so many sad and harrowing examples in the book show, but doctors and psychiatrists have no clue as to the depth of their patients’ suffering. And neither do their families .What Ed’s account of veterans and their afflictions helps us realize, is that the traumatic impact of war and violence inflicts wounds so deep we need to address them with an extraordinary degree of attention and with our most sensitive resources and methods.

What these ‘struggling souls’ are trying to tell us, writes Ed, is that ‘conventional models of medical and psychological functioning and therapeutics are not adequate to explain or treat such wounds.’ The term best able to describe the psychic condition or our veterans is that it is a Post Traumatic Soul Disorder. If conventional approaches insist on clinging to the perspective of “the eye of flesh” in Ken Wilber’s phrase we seriously risk losing our awareness of the depths of our human nature that can only be seen with the “the eye of spirit”

Tick recounts in his book how traditional societies and some modern psychiatric pioneers have held similar convictions about the post war illness warriors return with. In the light of all this I would propose that we re-name PTSS Soul Suffering from now on since such a term recognizes that it is fundamentally an identity disorder and soul wound, affecting the personality at the deepest levels. Ed writes in his book that when we, as therapists, “listen deeply to what PTSD is asking of us rather than imposing our conventional ideas upon it” then our own inner wisdom can speak. He describes how he uses “specific techniques include purification, storytelling, healing journeys, grieving rituals, meetings with former enemies, soul retrieval, initiation ceremonies, and the creation and nurturing of an warrior class.”

Ed Tick is a man who set out to be of real service and emerged as a true healer.

After a decade of psychotherapy Ed went in search of more effective methods for healing our veterans. It was the native wisdom of Northern American Indians and, shamanistic practices of various cultures, especially the Vietnamese, that helped Ed understand how violence influences the soul and how important it is to honor the soul’s need-what I like to call soulneed-instead of repressing and ignoring it.

Abandoning conventional forms of “talk therapy” he educated and trained himself in soul healing therapies and shamanistic rituals, fashioning practical healing methods for both  individuals and groups in today’s’ world. Where previously individual veterans had been submerged in the collective shock of war, each one is now offered a unique opportunity to retrieve his own spiritual being, those parts of the soul that were lost to him or her. Veterans working with Ed’s approach are able to release not only the souls he/she brought home with them, but are also able to discharge feelings of anger and guilt. Such healing can occur very swiftly and can restore much that was lost. So intense and personal are these experiences that they can only rarely be fully described

Ed gives many striking examples in the book of veterans, who described how they lost their souls. At times it reads so like an exciting novel or historical survey it is easy to forget that these are authentic stories of contemporary pain. Stories made all the more poignant since they voice a present day cry for help from those who are in fact the very last ones to ever cry for help-our own warriors!.

How come society lets our warriors down on such a scale? The effects of modern warfare are devastating and leave untold suffering among those who fight and those left behind. This is an issue of huge importance to all who live and vote in modern democratic society. Ed wisely writes as a non-engaged observer, chronicling the baleful effects of war but at the same time underlining a desperate need for change especially in our psychiatric and psychotherapeutic institutions, who have all forgotten that the Greek root of psyche is soul!

The story of Odysseus’ famous journey-ten years of obstacles and challenges before he finally arrives only to find his house occupied and in disorder-is used as a starting point for a short but very pointed historical enquiry into how ‘war’ became so deeply linked to what it is to be a ‘man’.

When I asked Ed during the conference why he takes Odysseus – known as the clever anti-hero, the ‘polypotrone’who hates to fight and would rather sneak off and hide – as an example for the veterans, Ed replied: “because the journey home symbolizes what homecoming veterans all go through… and because Odysseus is the very first hero in western literature to be rational, to actually think about what he is doing as a warrior. He no longer wants to fight for the glamour of fighting, but prefers to use his clever mind to avoid war altogether. That is what the challenge of our time is: overcoming the ‘need’ for war by being clever and intelligent”.

In his work Ed Tick literally takes groups of veterans ‘home’ – to the actual old combat zones where they fought and lost parts of themselves, back to the places where their trauma originates. In many ways this resembles the work we do in regression therapy and in Deep Memory Process: uncovering how the body absorb the traumatic events; how memories get stored; how parts of mind become lost, dissociate, and parts of the soul flee from reality; and how other soulparts invade or cling to the shattered living consciousness; all requiring us to recover the soul’s authentic energy and re-integrate it.

Ed Tick works in groups where veterans and their families can find others like themselves and share their experiences with those who are able to understand. Ed’s book cites many moving stories of how American men recovered, got back their identity and were able to start living again.

And this is what we need for healing our veterans: stable therapists who know how to treat these fragmented souls who return from war, polluted by misery, the loss of comrades, images of enemies they have killed.  They all mingled together with energies that intrude and confuse them, undermining their true identity. Only a few are lucky enough to find a true listener and therapist like Dr Edward Tick, who both understands and offers authentic practices to start their healing and finally lead to cure.

Looked at more precisely from the perspective of regression therapy Ed Tick’s work independently confirms the importance in regression of discerning how authentic personality and soulparts are, as a result of trauma and dissociation, energetically interwoven with physically attached non-authentic, and thus foreign, energies. Not only retrieval, but cleansing of the system is necessary. Body memories must be released along with attached comrades. Fragmented parts of combat experiences (including the soulparts of the enemy in battle) must be found and also cleansed. Only after this can authentic personal energy come home and re-settle in the system, enabling a client to feel complete and present again. With veterans especially, it is not necessary to have a shamanic animal bring back the lost energy, better to have this directly retrieved from where it was lost as it can enable profound catharsis when it is regained.

In my opinion, skills to work with ‘foreign energies’ are essential to the basic set of tools every professional practitioner should have available. Trainings by Roger Woolger and Hans ten Dam, developed out of years of practice experience, offer such skills, their work adding to and complementing each other. One training is never enough since each training and each session is different and every group brings new input and experiences. In order to establish a solid foundation for our profession, I believe we should continuously train. Our clients (and we ourselves) will benefit! 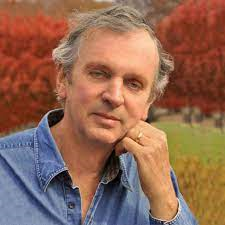