“Nothing is too wonderful to be true, if it be consistent with the laws of nature”. -Michael Faraday

The question is: what are “the laws of nature”, who knows them and who defines them?

When Michael Faraday the greatest experimental physicist of the 19th century announced that he had found a new source of energy by simply moving a magnet in a coil of wire, the educated people of his time found his claim impossible to believe and looked on him as a charlatan. This same man who established the basis for the concept of the electromagnetic field in physics set out to debunk the Fox sisters’ rappings and the spiritualist table turnings as fraudulent. Despite his effort and time invested in this project he never succeeded in proving so. As Richard Milton says “even someone who professed to believe that nothing is too wonderful to be true found table-turning an intolerable affront to reason”.

As we have already announced the theme of our next Annual Convention will be Exploring Extraordinary Experiences and will be held in a hotel nearby Dublin, Ireland. 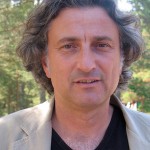 ductory article which you can download via download center, I thought of expanding a bit on these first thoughts before going into depth in some of the next articles. These thoughts are essential to put things into perspective. I will borrow some of the ideas from a Greek contemporary scholar of the paranormal Thanasis Vembos. In a great book of his titled The Midas Touch (unfortunately not available in English) he touches on the subject of scientific enquiry and quotes the physicist Nick Herbert when he said that “human beings are not capable of experiencing the true nature of quantum physics because whenever they touch into something it turns into matter”. In other words like the great mythical king Midas whatever he touched turned into gold. This lack of predictability in modern physics shows us how volatile things are and how we can affect matter with our mere thought.

We should never forget that what is accepted nowadays and could be placed on the left side of our continuum was once in the far opposite direction. The French chemist Antoine Lavoisier leading member of the French Academy of Sciences and father of modern chemistry stated in 1803 that the allegations about falling meteorites in the village of L’ Aigle, France were unscientific absurdities and he said that ‘stones cannot fall from the sky, because there are no stones in the sky!’ Museums all over the world threw away their meteorite specimens as humiliating reminders of a ‘superstitious’ past.

We should take into account that the deeper the paradox the rarer it is. One fact for this scarcity is the fact that those exceptional experiences are largely ignored by the consensus reality simply because they do not fit into the picture. The other reason is that they are indeed rare.

Another parameter that we should study is axis y which we will place vertically on our first axis x. This axis we will call the axis of the level of Observation/Documentation. There are phenomena that any of us can observe easily like the sunrise, the rainfall, the growth of plants those events we will place in the upper part of axis x. On the lower part of the continuum we will place the doubtful phenomena simply because there is not enough evidence gathered to cumulate for them. In this part we could place all these phenomena that are considered illusionary or delusional as well. 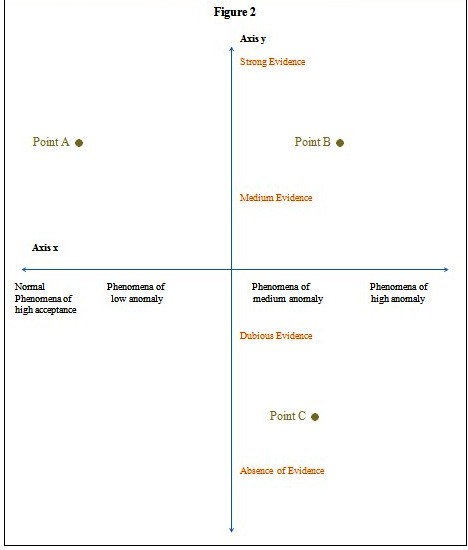 Borrowing from the work of Mr Vembos I supply you with these figures to make you see how relative some things are. So let us use some examples. First of all, if falling meteorites are on point A they simply belong there because on our current mainstream paradigm meteorites are now acceptable and there is plenty of evidence for them. Now on the other end of the continuum we could place reincarnation on point B. Even though it is still considered a phenomenon of anomaly there is plenty of evidence to support its existence. However, there is still a worse condition, point C. There we could place for instance the phenomenon of alien abduction. This phenomenon is highly anomalous and its evidential support is currently difficult to sustain.

Up to Figure 2 no scientist would have the least amount of objection. But if you see Figure 3 then you will notice that another axis is added and that is the axis of belief. Scientists like to think of themselves as objective bystanders but that is certainly not the case. This new three-dimensional model is more depictive of reality. What was once a consensus reality i.e. the geocentric view of the world, was a matter of belief and not of proper calculation or accurate observations. We cannot avoid but to see that we are biased by the prevalent zeitgeist.

So once the belief in the concept of reincarnation changes, more evidence will be observed and the phenomenon will suddenly become more visible and it will be gradually seen as less anomalous and therefore the whole paradigm will have to be revised to incorporate what was once the exceptional experience. So as it is evident the correlations are reciprocal and are interactive.

Put this table in front of you and try to see where could place angels, or, fairies on this continuum, just for practice…J 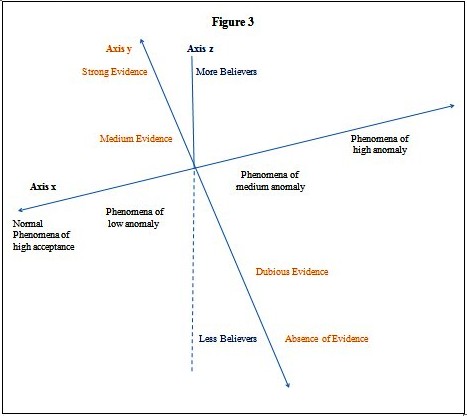 Now my dear colleagues we have to accept that we are in a profession that deals with issues that are not strongly evidential, that their level of anomaly is high and that belief in them by the majority is very low. Keep up the good work do not quit and keep on studying to become a better therapist.

To provide you with some relief I will quote here an excellent historical example from Richard Milton’s book titled Alternative Science:

“Once he had perfected his lamps, Thomas Edison rigged up a public demonstration by lighting the streets of Menlo Park around his laboratories where, for the first time in history, the night was ablaze with electricity. Members of the public travelled for miles to see the sight, but no scientist took up Edison’s invitation to come and see his lamps in operation. Not even Professor Henry Morton, who lived nearby and was personally acquainted with Edison, bothered to travel the short distance to witness his lighting, but wrote that he felt compelled ‘to protest in behalf of true science,’ that Edison’s experiments were a ‘conspicuous failure, trumpeted as a wonderful success. A fraud upon the public.’

As Professor Du Moncel said, ‘One must have lost all recollection of American Hoaxes to accept such claims. The sorcerer of Menlo Park appears not to be acquainted with the subtleties of the electrical science. Mr Edison takes us backwards’.”

So dear colleagues if the ‘Napoleon of Science’ had the guts to undergo such ridicule you have no reason to worry about what you do. Simply keep on doing it right.