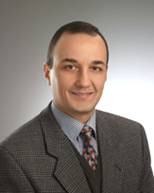 Resume: Resat graduated from Izmir State Conservatory in 1987. He studied bassoon, piano and composition. He has been working at the Izmir State Symphonic Orchestra as a bassoon player since 1987.

He began to be interested in spiritual knowledge when he was 20 years old. Then he contacted Metapsychical Investigations and Scientific Research Society. And he became a founder member of Izmir Spiritual Research Society of which he is president since 1993.

He gaves many lectures and seminars, wrote many articles on spirituality, consciousness, parapsychology, reincarnation etc.

He founded Ege Meta Publishing House in 1996 with his friends. This publishing house has published many books on spiritual, consciousness, new science, alternative health, reincarnation.

Resat began to make therapy in 2003. He got NLP and Ericksonian Hypnosis training and he became master practitioner of NLP.

In 2006 he established a new center called Integral Holistic Development Center. He gave many personal development workshops on Relaxation, Meditation, NLP and Creativity.

Resat is also a member of The EARTh is the Earth Association for Regression Therapy. He attained the summer course of this organization in 2007.

He conducted over 2000 personal therapy sessions since 2006.

He continues to make therapy, to give lectures, trainings and to write.

He is also interested in producing musics and sound technologies inducing altered states. He works on composing music to induce altered states. His first CD has been published in 2009 called “Guided Relaxation Practice” Its background music was composed by himself.

Publications: His books and CD in Turkish:

-Occultism, The Secret Sciences Along History, 1996